1913/1914 Temporary bonds, Black and White. Title reads "The Republic of Mexico. Temporary 6% Ten - Year Treasury Gold Bond of 1913 of the Federal Government of the United States of Mexico. (Lately bond is referred to as a "White Dove.") These Black and White bonds are very rare and are in great demand:

Santa Anna boldly signs this extremely graphic bond. It is without doubt the most impressive and ornate of all autographed stock or bonds. This $500 bond was issued in 1866 from New York City

while Santa Anna was living in exile. While he schemed to depose Emperor Maximilian, he issued these bonds in hopes of regaining power. In these attempts, he was captured and sentenced to death. Still, he was released and allowed to retire to New York and later when blind, he died in poverty and neglect. Of course, we remember him because of his success over the Texans at the Alamo and later his defeat and capture by Sam Houston at San Jacinto in 1836.

As you may already know, we are collectible stock and bond dealers. We are not brokers or involved in the world of finance in any way. Please look over our website. You will see most types and denominations illustrated on our website. We do have some of the best Mexican bonds that you may wish to buy and we do acquire them on a regular basis. Quite a number of the most popular bonds are listed below and priced. 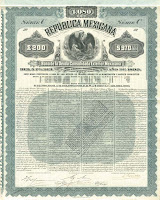 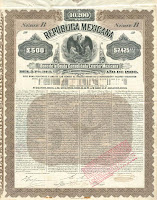 There are two types of buyers of Mexican bonds....

The first type want packages of several pieces of paperwork. Their goal is to place the paperwork into some sort of Bank Program. 99%+ of this type of "buyer" never actually buys anything.

The second type are people who want to buy authentic, uncancelled Mexican bonds. We show them the bonds, they wire funds when they are satisfied that the bonds are authentic, we hand them the bonds. This type of buyer is who we are looking for.

Quality Mexican bonds are in great demand at present. If you are the second type of buyer or if you know a buyer, please contact George H. LaBarre Galleries. We are a professional and experienced source of high quality old stocks and bonds. Our fine web site features over 6,000 different stock

s and bonds; 20 plus full color catalogs are also available.

Are you in the market for Mexican bonds? LaBarre Galleries currently has nearly 100 authentic, quality, Mexican uncancelled bonds. We are not financial people; we are collectible stock and bond dealers. We buy and sell old stocks and bonds as collectibles. 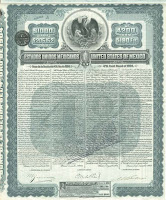 As you might imagine, we have been contacted by literally over 300 people and financial related institutions that have expressed an interest in buying Mexican uncancelled bonds.

We do have some great bonds at present that may interest you. You are very welcome to come to visit us. Our bank is 1 hour by car from Logan airport in Boston. I think you would enjoy going through our inventory.

About Old Stocks and Shares Certificates

Coshecton & Great Bend Turnpike Road
Here is an explanation of some differences in the use of the words 'stock' and 'share' across the centuries and currently in Britain and in the USA, When the first English 'joint stock companies' were formed in the 16th century, stock meant the owners' capital in the company -- what we now call equity. This stock was divided into parts or shares.

In the 19th century, American certificates for shares of stock were at first called c=share certificates, but later came to be called stock certificates (even though 'shares' are often mentioned in the text of the certificates).

The British continued to call them share certificates, even though they trade them through stockbrokers in a stock exchange. 'Stock' in Britain now generally means loan capital -- loan stock, debenture stock, or government stock.

The Scripophily Guide by Howard Shakespeare. Reprinted with permission from International Bond & Share Society
Posted by George H LaBarre Galleries at 10:02 AM No comments: