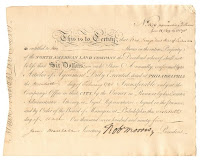 Robert Morris signs as President. Also signed by James Marshall as Secretary. Robert Morris was an American merchant, and a signer to the Declaration of Independence, the Articles of Confederation, and the United States Constitution.

He was elected to the Pennsylvania Assembly and became the Chairman of the Pennsylvania Committee of Safety, and a member of the Second Continental Congress where he served as the Chairman of the Secret Committee, and as a member of the Committee of Correspondence. Later Morris was known as the "Financier of the Revolution", because of his role in financing the American side in the Revolutionary War.

From 1781 to 1784, he served as Superintendent of Finance, managing the economy of the fledgling United States. At the same time he was Agent of Marine, a position he took without pay, and from which he controlled the Continental Navy. He was one of Pennsylvania's original pair of U.S. senators, serving from 1789 to 1795.
State: Pennsylvania
Years: 1795
Condition: Excellent