In the 1920s and early 1930s, many people who were trying to limit their investment risks chose the Bond Market as a safe haven. Trying to mitigate as much risk as possible, those investors chose bond instruments that were guaranteed by sound sovereign governments such as the United States or Western European countries like Germany, France, the United Kingdom and Switzerland. 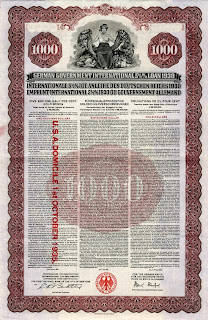 Specifically, they invested in German Gold Bonds starting with the “Dawes Bond” in 1924, followed by a multitude of others and ending with the “Young Bond” in 1930. These bonds were guaranteed by the German Government and backed by trustees like the Bank of International Settlements in Switzerland, J.P. Morgan and Citibank.