On Collecting Old Stocks and Bonds 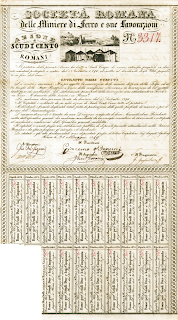 Ownership in shares of businesses is believed to go back to at least 2000 BC. In Rome in the second century BC there was active trading in the shares of business companies which were legal entities, some of them huge enterprises owning thousands of slaves. These companies faded away during Rome's Imperial period and their like did not reappear until after the Dark Ages.

The modern history of shares dates from the late 10th century AD, in the Italian port of Amalfi, where maritime ventures were divided into shares which were bought and sold, usually by their captains and merchants.

This became the normal way to fund voyages throughout Europe. The Pilgrim Fathers' Mayflower and Sir Francis Drake's global voyages were funded in this way. These ventures were not companies with a legal status independent of their owners, however, but a form of unincorporated partnership.


The Scripophily Guide by Howard Shakespeare. Reprinted with permission from International Bond & Share Society
Posted by George H LaBarre Galleries at 9:00 AM