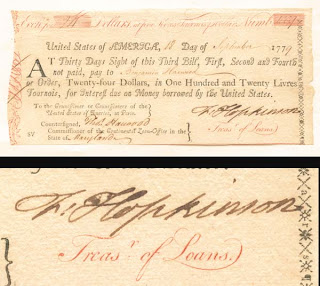 Francis Hopkinson was born at Philadelphia in 1737, the son of Thomas Hopkinson and Mary Johnson. He became a member of the first class at the College of Philadelphia (now University of Pennsylvania) in 1751 and graduated in 1757, receiving his masters degree in 1760, and a doctor in law (honorary) in 1790. He was secretary to a Provincial Council of Pennsylvania Indian commission in 1761 that made a treaty with the Delaware and several Iroquois tribes. In 1763, he was appointed customs collector for Salem, New Jersey. Hopkinson spent from May 1766 to August 1767 in England in hopes of becoming commissioner of customs for North America.

Although unsuccessful, he spent time with the future Prime Minister Lord North and his half-brother, the Bishop of Worcester Brownlow North, and painter Benjamin West. After his return, Francis Hopkinson operated a dry goods business in Philadelphia and married Ann Borden on September 1, 1768. They would have five children. Hopkinson obtained a public appointment as a customs collector for New Castle, Delaware on May 1, 1772. He moved to Bordentown, New Jersey in 1774, became an assemblyman for the state's Royal Provincial Council, and was admitted to the New Jersey bar on May 8, 1775. He resigned his crown-appointed positions in 1776 and, on June 22, went on to represent New Jersey in the Second Continental Congress where he signed the Declaration of Independence. He departed the Congress on November 30, 1776 to serve on the Navy Board at Philadelphia. As part of the fledgling nation's government, he was treasurer of the Continental Loan Office in 1778; appointed judge of the Admiralty Court of Pennsylvania in 1779 and reappointed in 1780 and 1787; and helped ratify the Constitution during the constitutional convention in 1787.

On September 24, 1789, he was nominated by President George Washington to the newly created position of judge of the United States District Court for the District of Pennsylvania. He was confirmed by the United States Senate, and received his commission, on September 26, 1789. As a federal judge, Hopkinson died in Philadelphia at the age of 53 from a sudden epileptic seizure. He was buried in Christ Church Burial Ground in Philadelphia. He was the father of Joseph Hopkinson, member of the United States House of Representatives and Federal judge.