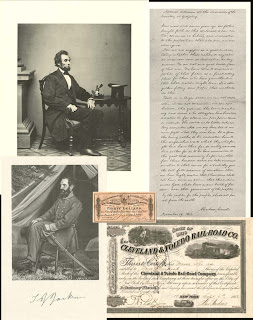 This collection representative of the Civil War includes 10" x 13" card stock portrait of Abraham Lincoln, Cleveland and Toledo Railroad Co. Stock, 5 1/2" x 8 1/2" portrait of Stonewall Jackson, 3" x 1 1/2" Thirty Dollars Confederate Bond, and a 6 1/2" x 13 1/2" print of the Gettysburg Address. The American Civil War (1861–1865), often referred to as The Civil War in the United States, was a civil war fought over the secession of the Confederacy. In response to the election of an anti-slavery Republican as President, 11 southern slave states declared their secession from the United States and formed the Confederate States of America ("the Confederacy"); the other 25 states supported the federal government ("the Union"). After four years of warfare, mostly within the Southern states, the Confederacy surrendered and slavery was outlawed everywhere in the nation. Issues that led to war were partially resolved in the Reconstruction Era that followed, though others remained unresolved.