Yellowstone Park Association stock, issued to and signed at back by Colgate Hoyt. (1849–1922) He was an American businessman active in the late nineteenth century. He was a director of the Oregon Railway and Navigation Company, and one of the founders of Everett, Washington, where a main street is named after him. He was a New York investment banker who was the partner of Joseph L. Colby as Colby, Hoyt. They were active together in the organization and finance of many businesses. 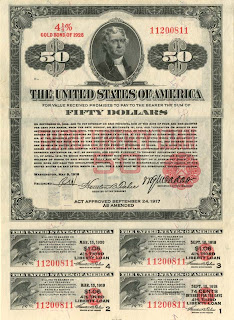 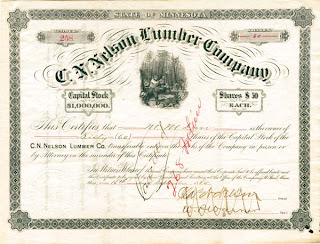 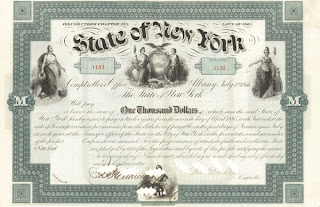 $1,000 Bounty Bond from the State of New York.
Bonds raised money to entice men to join the army during the Civil War. Title at back- 'Bounty Bond'. Hole canceled.

60 Francs. Historically important provisional bond. Quite a complex piece with much detail at front and back.  Scarce and exciting! 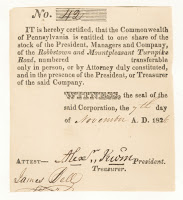 Norvin Green (1818-1893), Physician, Legislator, President of the Western Union Telegraph Company. At the age of 16 he opened a grocery store on a flatboat and traveled down the Ohio & Mississippi selling supplies to the lumbermen on the banks. In 1840 he graduated from the Medical College of the University of Louisville. His medical practice was interrupted by two terms in the Kentucky House of Representatives, 1850-53.

The year 1853 also marks the time when Green definitely turned his back on medicine and politics and engaged in the business career which was to bring him his reputation. In this year two rival telegraph lines from Louisville to New Orleans-the People's, and the New Orleans & Ohio-were consolidated after a period of ruinous competition, and the consolidated lines were shortly leased for operation to a number of men, of whom Green was one. He was one of the first to conceive the idea of a national consolidation of telegraph companies, and in 1857 he took the first steps toward realizing his ambition by initiating the consolidation of the six leading telegraph lines in the U. S. This resulted in the formation of the North American Telegraph Company.

In 1866 the process was completed by the formation of the Western Union, embracing all the lines in the U.S. Green served as vice president of it until 1878, when he became the president and continued in that capacity until his death.

Green was a prominent figure in Louisville and in 1867 was elected as one of the representatives from that city in the Kentucky House of Representatives. From 1870 to 1873 he was president of the Louisville, Cincinnati, & Lexington Railway. 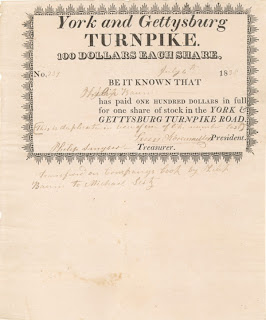 One Share of $100 of the  York and Gettysburg Turnpike  stock.